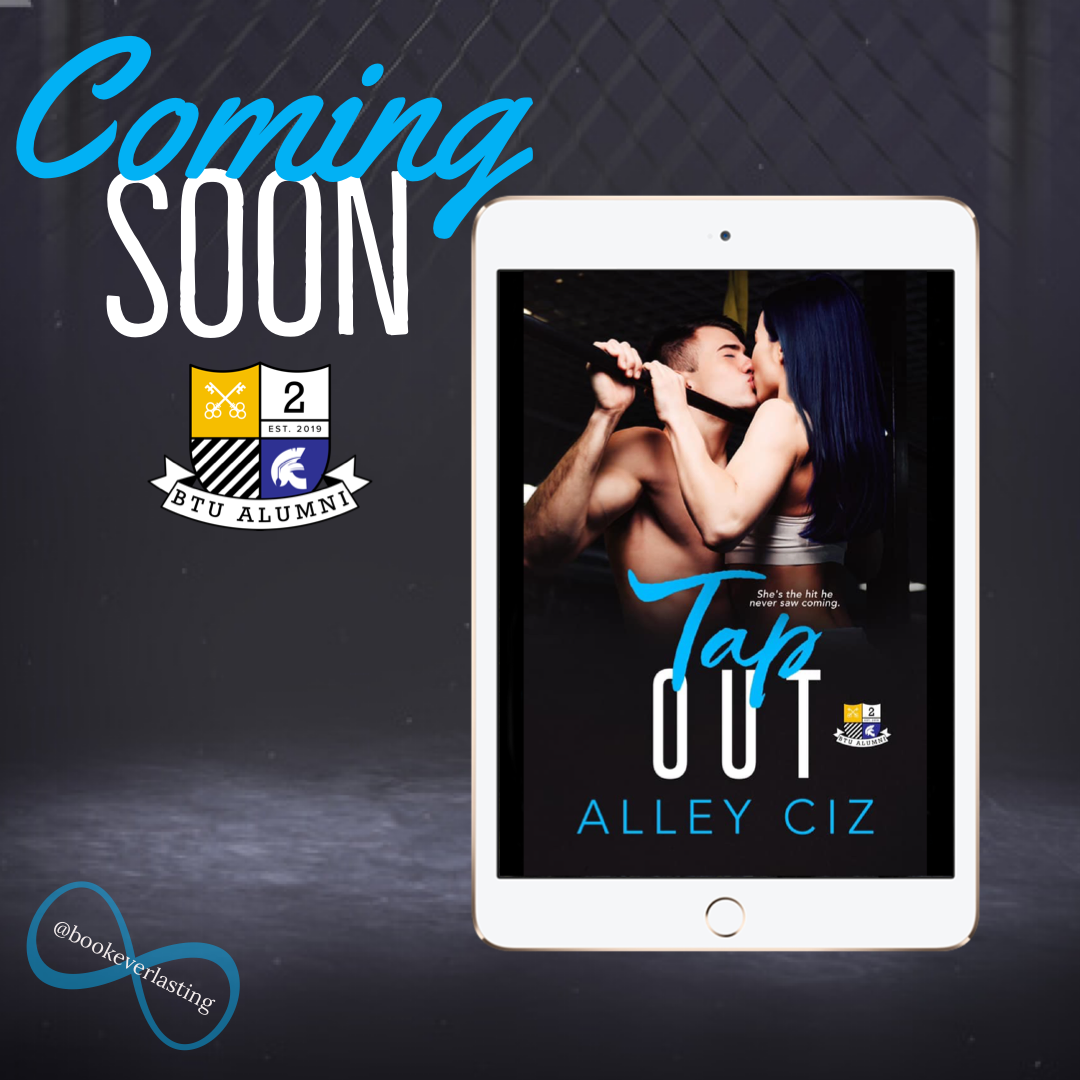 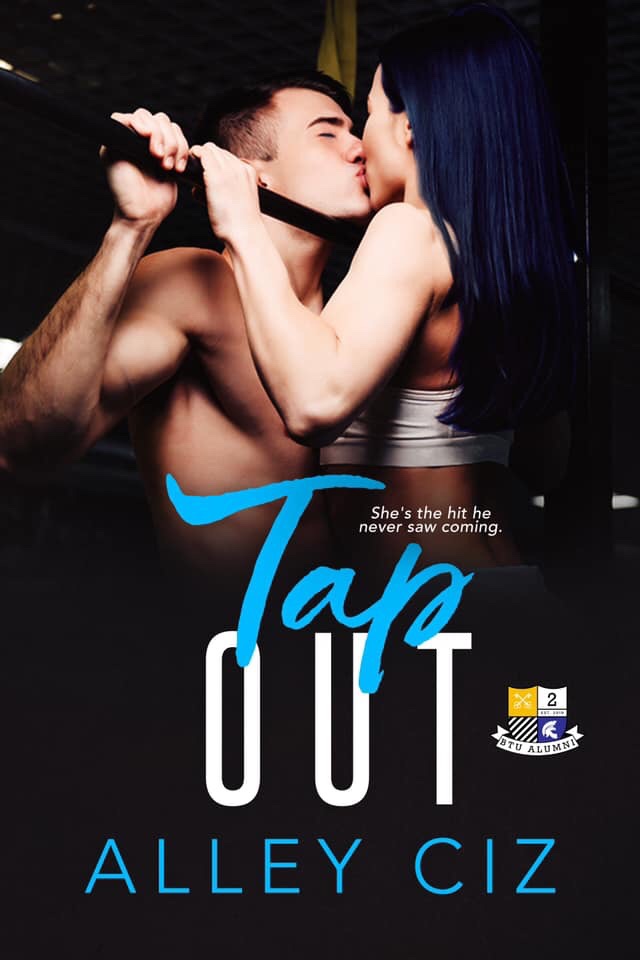 Tap Out by @authoralleyciz is coming September 9th, check out this hot cover!!

What would you do if you came face-to-face with your celebrity crush?

As a physical therapist in a world renowned gym, she works with the best of the best, from NHL hockey players to UFC fighters. Celebrity status does not impress her. Nor do big, strong men in peak physical condition.

When it comes to her job, she’s one hundred percent professional.

And the newest fighter to train in her gym.

Where it will be her job to put her hands on every inch of the six foot seven two hundred and sixty pounds of utter Alpha male perfection.

She’s got this… Maybe.

Gage ‘The Kraken’ James is the reigning Heavyweight Champion in the UFC.

When he walks into The Steele Maker for the first time, it’s like he’s hit with a one-two punch to the chest in the form of a certain raven haired firecracker.

His every waking thought.

He’s in for the fight of his life.

The stakes are higher… outside the octagon.

Time to release The Kraken.

TAP OUT is the second book in the BTU Alumni Series and can be read as a standalone. All your favorites return as a new cast of characters joins in on the fun. Prepare for major #SquadGoals as you get your first peak inside The Coven. This book features a hella sexy UFC Champ, feisty besties, the most awesome coffee house ever, scenes that might melt your kindle, and a heroine who can fight her own battles thank you very much. Time to tap gloves, HEA guaranteed. 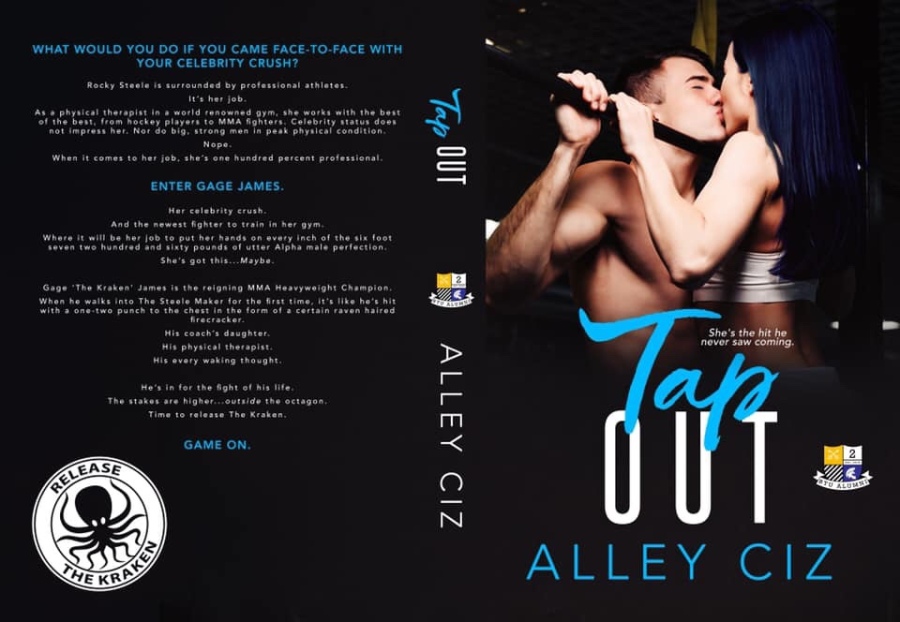 The Coven is real

YOU KNOW YOU WANNA (Becky): OMG is this real life or are we in one of your dreams right now?

ALPHABET SOUP (Rocky): IDK but if this is a dream DO NOT WAKE ME UP!

YOU KNOW YOU WANNA: In the immortal words of Michelle Tanner. You got it Dude!

YOU KNOW YOU WANNA: *GIF of Michelle Tanner giving a thumbs up*

ALPHABET SOUP: This is why I love you so!! *kissy face emoji*

YOU KNOW YOU WANNA: Seriously though. You HAVE to go for it…how many people get their celebrity crush put in front of them for the taking?

YOU KNOW YOU WANNA: NOT GOOD ENOUGH. Looping in the rest of The Coven.

The rest of the girls would definitely have opinions. She may have said in the past that she would make a move on Gage if she ever had the chance, but in her heart of hearts, she knew she wouldn’t. Besides, she’d thought she had a billion in one chance of ever meeting the guy. He was a fighter, so he would never be more than a celebrity crush. Unavailable crushes were safer than dudes in real life.

YOU KNOW YOU WANNA: You guys are NEVER going to believe who the newest fighter to join The Steele Maker is

QUEEN OF SMUT (Maddey): Enough with the cliffhanger. I’m on deadline here Beck

PROTEIN PRINCESS (Gemma): Seriously. You are the WORST with this sometimes

MAKES BOYS CRY (Skye): Don’t make me come down there

MOTHER OF DRAGONS (Jordan): Seriously, spit it out before the twins wake up from their current milk comas

PROTEIN PRINCESS: Rock, you’re with her. Make her tell us ALREADY

YOU KNOW YOU WANNA: Pff… It’s about her…she’s not going to say anything. But fine I’ll put you guys out of your misery…

QUEEN OF SMUT: I swear to god Beck, I will sick my editor on you when I miss my deadline because I left my writing chair at Espresso Patronum to strangle you

YOU KNOW YOU WANNA: Such a flare for dramatics. It’s obvious you live in a world of fiction. Anyway…

YOU KNOW YOU WANNA: The newest fighter to be trained here at The Steele Maker…

YOU KNOW YOU WANNA: Is…

QUEEN OF SMUT: Also…am I the only one who’s noticed Rock has been suspiciously quiet through all this

MOTHER OF DRAGONS: Hurry up before I have to parent again…

There was a long pause while everyone processed that, followed by a barrage of text messages tripping over each other to be the first to ping through.

MAKES BOYS CRY: You mean like this fine hunk of man meat?

MAKES BOYS CRY: *GIF of Gage flexing in only his tiny fighting shorts*

QUEEN OF SMUT: Oh shit. I think I saw him at EP with Papa Steele this morning

YOU KNOW YOU WANNA: Look I know he’s hot. Like melt your panties, take me back to your lair and do whatever you want to me hot. But that is not the most important thing here people

PROTEIN PRINCESS: Because we all know we’ll be here until tomorrow if we wait for Beck to FINALLY get to the point, I’ll make it for her

PROTEIN PRINCESS: Rocky has a huge lady boner for him.

🥊 GAGE AND ROCKY STEP INTO THE CAGE: SEPTEMBER 9TH 🥊