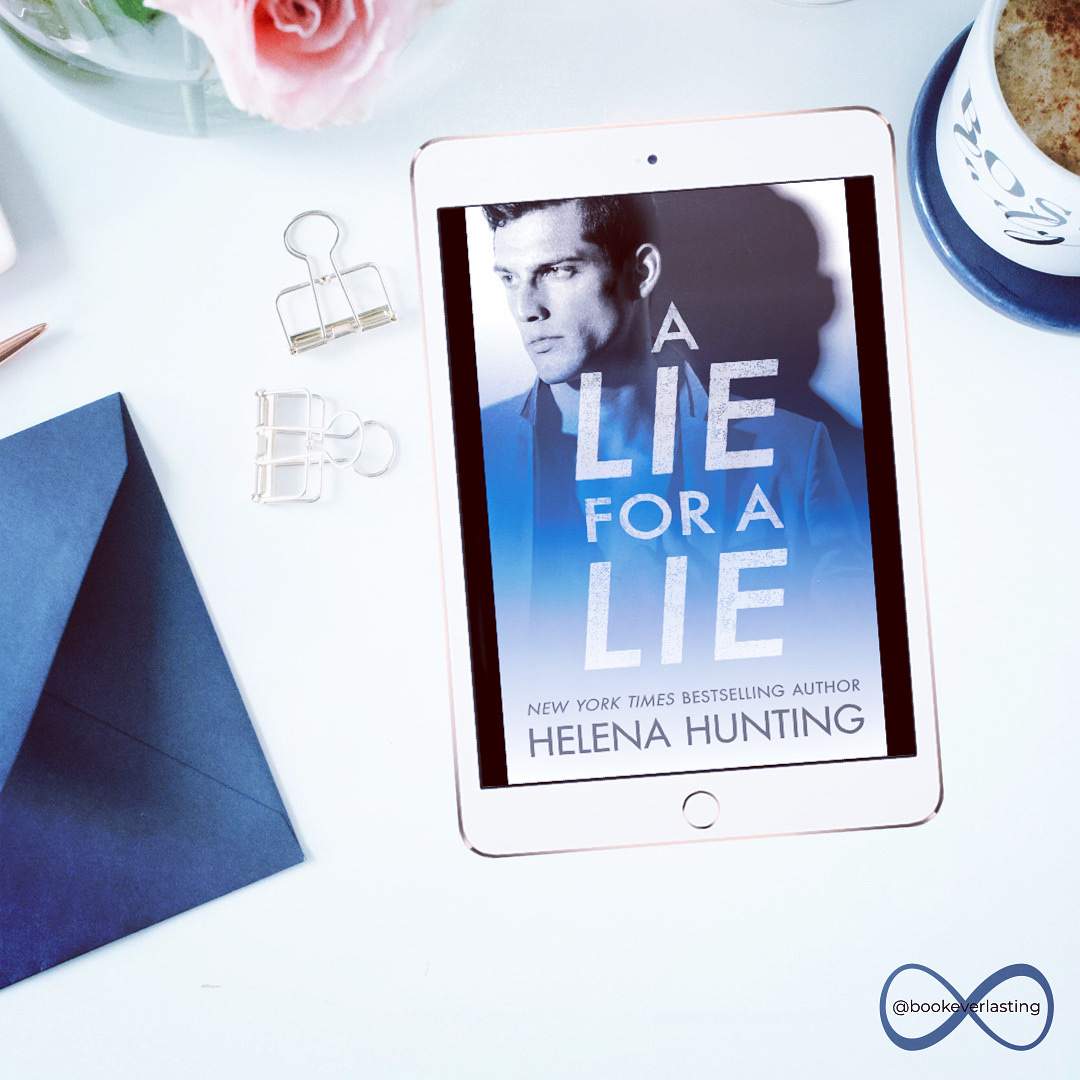 Sometimes I need an escape from the demands, the puck bunnies, and the notoriety that come with being an NHL team captain. I just want to be a normal guy for a few weeks. So when I leave Chicago for some peace and quiet, the last thing I expect is for a gorgeous woman to literally fall into my lap on a flight to Alaska. Even better, she has absolutely no idea who I am.

Lainey is the perfect escape from my life. My plan for seclusion becomes a monthlong sex fest punctuated with domestic bliss. But it ends just as abruptly as it began. When I’m called away on a family emergency, I realize too late that I have no way to contact Lainey.

A year later, a chance encounter throws Lainey and me together again. But I still have a lie hanging over my head, and Lainey’s keeping secrets of her own. With more than lust at stake, the truth may be our game changer. 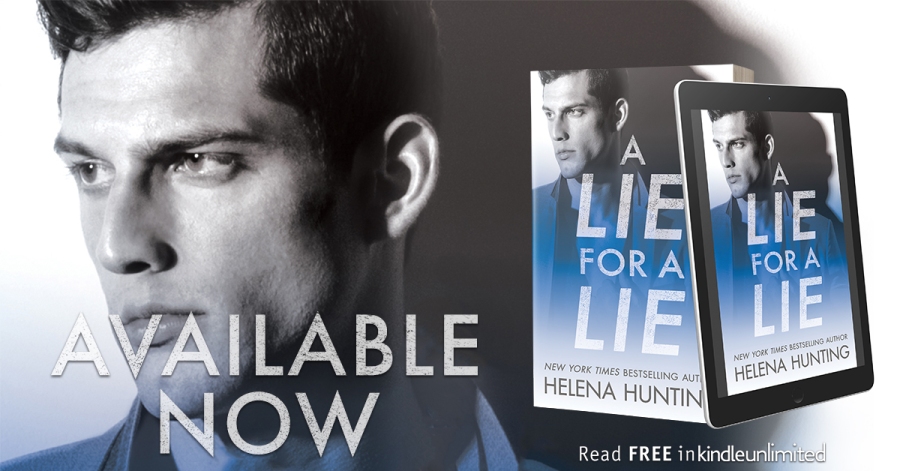 Download your copy today or read FREE in Kindle Unlimited! 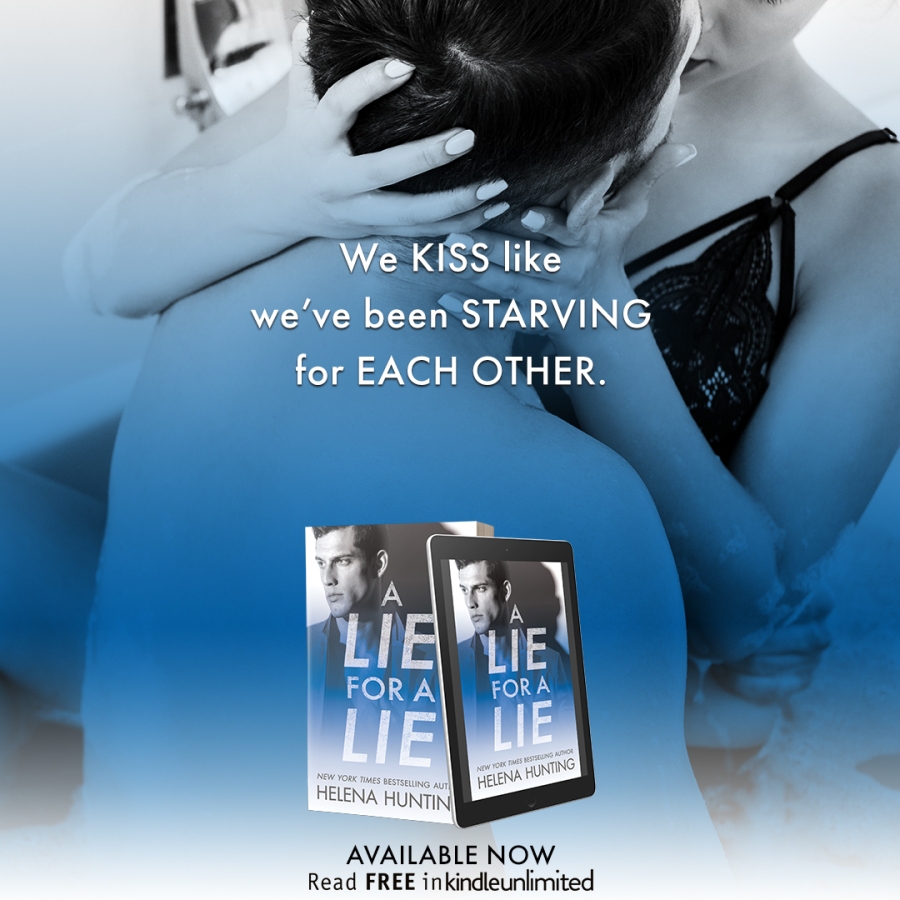 Helena…you’ve done it again! Another book and start of series that I FLOVE!!! RJ aka Rook and Lainey are just the cutest couple. RJ is such a big softie and so sweet. They each had their reasons, but the title says it all.

“I should tell him my own truth. But for now we’re tied: a lie for a lie.”

This second chance romantic comedy had it all, I can’t stress enough that you NEED this book! I was so happy we get snippets of the characters from the PUCKED series and little Robbie with the “yer-nal hockey” made me cackle. A Lie For A Lie is an EPIC read and the first book in the All In Series. I’m super excited for A Favor For A Favor. A Lie For A Lie by Helena Hunting will join the ranks of the BIBLIO-ARISTOCRACY!!!

I stuff my earbuds in and cue up a movie on my entertainment console. After the last flight, I deserve three hours of brain candy.

Just as I settle on an action flick, a body lands in my lap. At first, I think I’m being accosted—yet again. It’s not unusual for women to literally throw themselves at me. Typically I’m not on a plane, though, but considering my last flight I shouldn’t be surprised by anything right now. “What the—”

“I’m so sorry!” says the voice attached to the body in my lap. She scrambles to right herself but jerks back, gagging, her tidal wave of silky, dark hair slapping me in the face. It smells like mint and cucumber, which would be nice if it weren’t in my mouth.

She grabs my shirt with one hand and catches my earbuds, yanking them free. The other hand curls under the fabric wrapped tightly around her throat. She’s sprawled across my lap, legs hanging over the armrest, face level with mine. She’s totally blocking the aisle, making it impossible for anyone to get by and creating quite the spectacle. “My scarf is caught,” she rasps. “Oh my God. I’m choking myself. I’m so sorry. This is so embarrassing.” The more she struggles, the more the scarf tightens, which in turn causes her to flail.

I slide a supporting arm behind her. “Stay still for a sec.”

She freezes, still gripping my shirt, eyes wide with panic. I turn my head to the side and lean forward. Her lips connect with my cheek.

“Oh!” She tries to turn away, but she really is stuck, so her nose ends up in my ear and her lips are still pressed against my jaw.

“Just give me a few more seconds, and you’ll be free.” She exhales heavily against my jaw, warm breath making my skin prickle. I lift her carry-on and use my foot to pull the scarf free from the wheel.

She loosens the fabric around her throat, dragging in a long, deep breath. “Thank you. So much. Choking to death on an attractive man’s lap really isn’t the way I wanted to go.” She squeezes her eyes shut and pushes to a stand. “I’m so sorry.”

She keeps her gaze averted as she gathers up the scarf that never seems to end. It gives me time to check her out. Well, shit. This woman is hot. Like Pour a gallon of gasoline on me and light me on fire hot. She has long dark hair, a shade of brown so deep it’s nearly black. Her eyes are the color of coffee or chocolate—something with caffeine in it. Something that would amp me up. And her face . . . daaaaamn. High cheekbones, full lips, a dainty nose, arched brows, thick lashes.

I take in the rest of the package, which gives me pause because her outfit is just . . . out there. She’s wearing a full-on parka, hiding her figure, but based on her legs I’m thinking she’s probably slender. That’s a guess, though, with all the layers she has going on. And that scarf has to be a mile long with how many times she winds it around her neck, hence the near strangulation.

Her little wardrobe malfunction has resulted in a line of people waiting to board, so she rushes down the aisle, throwing another “So sorry” over her shoulder as she disappears into coach.

I’m almost disappointed. Almost, but not quite. I plug my earbuds back in and veg out to movies for the next three hours.